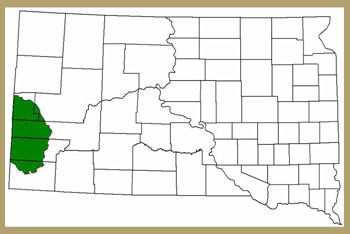 The Black Hills Forest Fire Protection District (BHFFPD) is an area in west central South Dakota established by State Law 34 - 35 - 15. The District was established in 1941 to protect the timber in areas subject to unusual fire dangers.

The law states:
34 - 35 - 15. Black Hills Forest Fire Protect District - Area included. To protect timber on areas subject to unusual fire dangers, there is herby created the Black Hills Forest Fire Protection District, consisting of all that part of the state described by metes and bounds as follows: Commencing at a point on the Wyoming - South Dakota state line at the junction of Interstate Highway 90 at the state line; thence east and southeast along Interstate Highway 90 via Rapid City to the intersection of U.S. Highway 16B; thence south and southwest along U.S. Highway 16B to the intersection of State Highway 79; thence south along State Highway 79 to the intersection U.S. Highway 18; thence south along U.S. Highway 18 to the Cheyenne River; thence west and northwest along the Cheyenne River to the Wyoming - South Dakota state line; thence north along said state line to the place of beginning. The Black Hills Forest Fire Protection District does not include any area within the limits of any municipality.